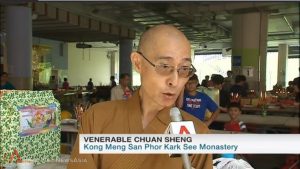 SINGAPORE: In the lead-up to Qingming Festival on Apr 4, some Taoist and Buddhist institutions have issued new guidelines on the burning of offerings for safety and environmental reasons.

Also known as Tomb-Sweeping Day, Qingming Festival is a time for Buddhist and Taoist devotees to pay respects to their ancestors – usually done by offering food and incense and the burning of paper clothes in bags or boxes.

One such institution to have issued new guidelines is the Kong Meng San Phor Kark See Monastery, which is banning the burning of large paper box offerings from this year onwards.

“We started publicising the message a year ago and I’m sure our devotees and public are all very understanding about this,” said Venerable Chuan Sheng from the Kong Meng San Phor Kark See Monastery. “We’re very encouraged by their response that we’re all working towards more eco-friendly policies, which will benefit all of us.”

Three years ago, the monastery also installed an eco-burner with an environmentally friendly ash filtration system. This was aimed at reducing the amount of ash produced during peak periods, such as Qingming Festival and the seventh lunar month, when the number of visitors can range from 40,000 to 60,000 daily.

Only staff from the monastery are allowed to conduct the burning of offerings.

Since its introduction, the eco-burner has “significantly mitigated” the impact of burning, especially during peak periods, according to a monastery spokesperson. “(This) has also greatly reduced the amount of feedback we received from those staying in the vicinity.”

“There has also been a lot of understanding and support in the monastery’s move to stop the burning of joss paper boxes and we hope to continue to do our part to protect the environment by introducing more environmentally friendly initiatives,” the spokesperson added.

Another institution that is seeking to adopt greener guidelines is the Singapore Kwong Wai Siew Peck San Theng columbarium.

Only its staff members are allowed to burn joss paper offerings and incense sticks. Visitors have to remove the plastic covers and materials from their offerings before handing them over for burning – a policy which has been in place for around 10 years.

From next year onwards, the columbarium also plans to ban the burning of paper box offerings during peak periods.

Mr Sum said that such smoke was caused by the burning of the contents inside the boxes, such as real clothes and shoes belonging to the deceased relatives of visitors.

He added that the large fires and smoke created by the burning have even prompted residents from the nearby Braddell Heights estate to call the fire services on at least one occasion, concerned that there may have been a fire.

One expert says that such measures are not just better for the environment, but also for one’s health.

Duke-NUS Medical School clinical sciences professor Koh Woon Puay co-led a study in 2014 which found that people who used incense at home for at least 20 years had an increased risk of death from cardiovascular disease in the follow-up period, compared to people who did not use incense.

“Going by the principle that the smoke from the burning of incense and other offerings may contain harmful chemicals, I think any measures to reduce the public’s exposure to it, especially indoors, would be helpful at the population level,” said Prof Koh.

“Our research has shown that the risk is specifically increased in people with very long-term exposure to the indoor use of incense, most of the time in their own home, and for 20 years or more,” she said.

“So it is really the consistent, daily long-term exposure that creates more harm than the once-in-a-while, episodic exposure to burning, say when you visit the temple or places where burning occurs,” she added.

Prof Koh also advised the reduction of exposure to burning for vulnerable populations, such as the young and elderly suffering from chronic lung disease.

With these measures in place, it’s hoped that more devotees will consider other offerings in place of paper box offerings.

“From a Buddhist perspective, it is more of the mindset that matters in terms of such offerings,” said Venerable Chuan Sheng.

“It does not matter very much how big or the quantity of the offering, but as long as the mindset is pure, sincere and full of gratitude and filial piety towards ancestors, that is much more important. So we encourage very much the offering of simple items like flowers, fruits, to encourage the practice of the virtue of generosity.”

A long-simmering conflict between preserving an age-old tradition during the Qing Ming Festival and showing consideration for the environment has come to a head.

The Kong Meng San Phor Kark See Monastery in Bright Hill Road, the largest Mahayana Buddhist temple in Singapore, will impose a ban on the burning of bulky paper boxes as offerings to the dead during this year’s festival, which falls on April 4.

Known as “treasure chests”, such boxes contain items such as paper clothes and watches, common paper offerings representing items that had given devotees’ relatives pleasure and comfort in life.

Buddhists and Taoists customarily burn incense paper items to show filial piety to their ancestors during Qing Ming. Chinese of other faiths may also mark the occasion. The 2010 census recorded more than a million Buddhists in Singapore and over 330,000 Taoists.

A Kong Meng San spokesman said such boxes, which typically measure about 55cm in length and 40cm in height, will be banned as the cardboard used to make the boxes “leads to higher amounts of ash and smoke emitted during burning”. While the burning of other paper offerings in the monastery’s burners is still allowed, the temple will not rule out the possibility of extending the ban to other items.

Ash created from the burning of incense paper by devotees has long been a bone of contention with the temple’s neighbours. In 2012, residents of two private estates formed a committee to get the temple to contain the ash from its burners that lands on their properties. The temple redoubled cleaning efforts and installed burners that were more environmentally friendly in 2014. But out of concern for the environment, it decided to introduce the ban this year . It started sending out word on the ban on social and mass media platforms about a year ago. The temple expects daily weekend crowds of 40,000 to 60,000 during the Qing Ming period, which lasts for about a month from mid-March.

Peck San Theng’s general manager, Mr Liu Khee Sang, 62, said items such as paper cars or bungalows can be 2m or 3m wide and are burnt in 10m-tall urns. As a safety measure, only its staff are allowed to burn the offerings and joss sticks, and they will stop accepting big items from next year.

Worshippers like housewife Tay Cheng Toh, 62, welcomed the move to be more environmentally friendly. “We don’t want to be a nuisance to other residents,” she said.

But others said the move dilutes a valued tradition. “Imposing a ban is like asking people not to give out red packets during Chinese New Year,” said copywriter Cindy Tan, 60, who will burn offerings at the San Qing Gong temple in Bedok.